Canada geese are an important wildlife food resource for Cree communities living along James Bay east coast. According to traditional ecological knowledge (TEK), environmental changes along the coast, especially the decline of eelgrass, have affected hunting success. However, other changes can also alter the migration pattern of geese and hunting success. For instance, the growing number of long-necked geese that migrate north to molt and the attractiveness of agricultural fields in the south can influence the timing and migration routes of geese.

The first objective of our study was to determine changes in the relative importance of four Canada goose populations harvested by Cree hunters during the last 60 years. Geese that migrate along the east coast are associated to the Atlantic Population, the Southern Hudson Bay Population, the Atlantic Flyway Resident Population, and the Mississippi Flyway Giant Population. Each population has its own dynamics (fecundity and survival rates) and this can influence their numbers and thus their availability for harvest. The second objective was to determine the habitats, especially eelgrass beds, that influence the distribution of geese in spring and fall. Finally, we want to determine habitat use by individual geese tracked with GPS devices. 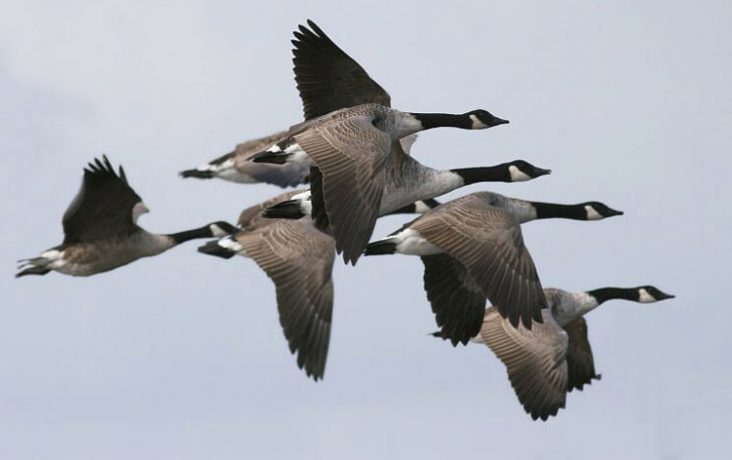 We used 3,500 recoveries of geese reported between 1960 and 2020 to determine population affiliation based on when and where the geese had been banded. Two aerial surveys were conducted in spring 2018 and two in the fall 2018 to determine the number of geese in each coastal trapline. The habitat characteristics determined by remote sensing will be used to explain the variation in the number of geese. Finally, we fit 43 geese with GPS devices between 2017-2019 in the Puvirnituk area and 23 in Boatswain Bay in 2018 and tracked them during their subsequent migrations.

Jean-François Giroux, professor at UQAM, is assisted by Martin Patenaude-Monette, Manon Sorais, and Francis St-Pierre who conducted the aerial surveys, the banding operations, and the data analyses.

Links to other components

The goose project is linked to the eelgrass study and more importantly to the work of the remote sensing team. It is also intricately linked to the Traditional Ecological Knowledge (TEK) study so that we can better understand changes that occurred in the goose populations harvested during the last 60 years.

Niskamoon coordinator, Ernie Rabbitskin, participating at the aerial survey in 2018 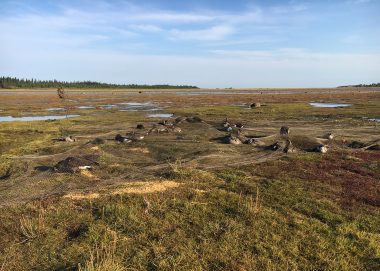 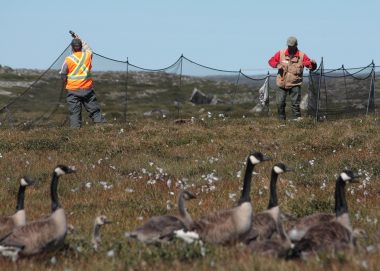 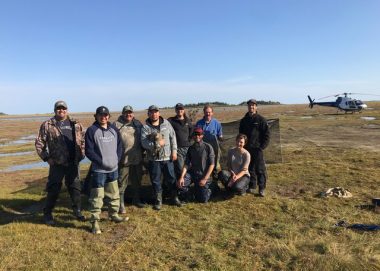 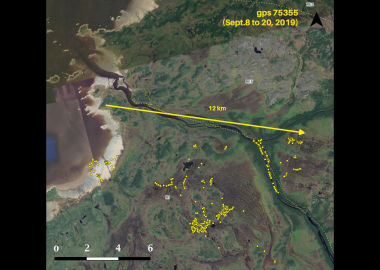